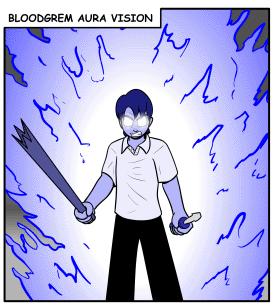 Glowing with health and Badassery.

The ability to perceive normally invisible Life Energy of others, often colour-coded for good/evil, emotions, amount of life, Power Level, etc. This can be presented as Functional Magic, Psychic Powers, related to spirituality, a biological gift, or even technological.

Auras can be seen as a glowing outline or colouring on a character's skin. For extra clarity the character/monster of week's vision may be shown in black and white to make the auras more distinctive.

Supertrope of Detect Evil. Subtrope of Psychic Powers. Sister Trope of Enemy Scan and The Force Is Strong with This One. When the Aura is representative of something else, see Editorial Synaesthesia, Power Glows, Fluorescent Footprints or Battle Aura.

Examples of Aura Vision include:

Retrieved from "https://allthetropes.org/w/index.php?title=Aura_Vision&oldid=1963600"
Categories:
Cookies help us deliver our services. By using our services, you agree to our use of cookies.