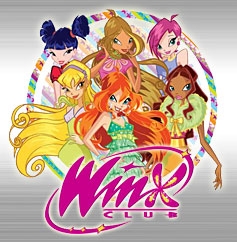 Winx Club (2004-) is an animated series produced by Rainbow SpA and Nickelodeon, which are both part of Viacom. It follows the adventures of a group of fairy warriors as they attend (and during the fourth season, graduate from) the Alfea College for Fairies. The show was designed for Multiple Demographic Appeal, mixing fairies and magic with action sequences and mythical villains. Imagine Hogwarts crossed with Power Rangers (or Super Sentai), all tied up in a Magical Girl show.

The Winx world is a veritable mish-mash of magic, modern day, and hip-hop songs. Each of the major characters comes from a different "realm" (or planet) in the "Magical Dimension" (although some realms are called "dimensions" themselves).

The show stemmed from Iginio Straffi's pilot, "Magic Bloom". Straffi outlined the show's story from the very beginning, intending it to wrap up after the third season, in which the characters gain their "final fairy form" and Bloom discovers the whereabouts of her birth parents. Plans changed after the show turned into a Cash Cow Franchise during its first few years, and the show was renewed for a fourth season. The show became an International Coproduction in 2010, with Viacom's Nickelodeon co-producing new episodes at their American animation studio. In 2011, Viacom's Italian branch became a co-owner of Rainbow SpA (Winx Club's animation studio) alongside Straffi.

Financial issues stalled the start of a rebooted eighth season, which eventually premiered in 2019. The new season was restyled to appeal to a much younger, preschool-aged demographic. In a jarring move, most of the show's integral crew members (art director Simone Borselli, singer Elisa Rosselli, etc.) were not even called back to work on the eighth season. If that wasn't enough, crucial sequences from Season 8 are traced from other animations like Sailor Moon Crystal, further showing this season's low budget. Thankfully for the show's older fans, a live-action adaptation aimed at young adults is in the works, retelling the first three seasons' story.

Has its own wiki.

Tropes used in Winx Club include:
Retrieved from "https://allthetropes.org/w/index.php?title=Winx_Club&oldid=1862776"
Categories:
Cookies help us deliver our services. By using our services, you agree to our use of cookies.