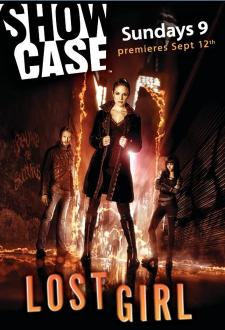 Lost Girl is a 2010-present Showcase television series that revolves around Bo, a young woman with the ability to control men and women through her touch and suck the life from them with a kiss. She is a succubus, and one of the Fae, a group made up of several races of supernatural entities separated into two sides: Light and Dark. Rather than choosing a side, Bo decides to strike out on her own and learn about her past with the help of a streetwise sidekick named Kenzi, and a Fae police detective named Dyson. Now being shown on Syfy.

Tropes used in Lost Girl include:

Gary: You know what they say-- sometimes a flesh-eater is just too tired to get out of bed, go to the fridge, know what I mean? [bites off his own index finger]

Bo:Guy disappears for 3 weeks and leaves you hanging, usually the girl gets to be the pissy one, yes?
Kenzi:That is how I've come to understand things from my education in romantic comedies, yes. Also, girls with glasses are way smart and being klutzy is adorable.

Lauren: Well, physically you're fine.
Bo: But emotionally I'm a level 10 harpy. (One of Lauren's medical staff slams something down and storms off, giving Bo a dirty look). Is she...?
Lauren: Of the Boston harpies.
Bo: Great.

Bo: I love you…all, so much

Lauren: It's just that the doctor part of me never shuts off, and I know that I’m merely acting out of transference of grief onto you. Wanting to have sex is a very common response to grief. Biologically speaking, the transference often helps move the pain. Sort of use it as something else. Turn it into something different. Something better...
Bo: (grinning) I love it when you totally geek out.
Lauren: Can I sleep with you?
Bo: Yes.
Lauren: I just mean sleep. (Bo's face falls a little) In your arms?
Bo:...Yeah exactly.