Is This a Zombie?

Everything About Fiction You Never Wanted to Know.
(Redirected from Kore wa Zombie Desu ka?)
Jump to navigation Jump to search 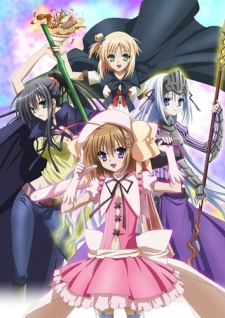 The magical girl, the necromancer, and two vampires. Not pictured: the zombie.

Ayumu Aikawa is dead - or was dead. This Ordinary High School Student has since been resurrected as a zombie by Necromancer-knight Eucliwood Hellscythe ("Eu"), who is now living at his house. Relaxing in the cemetery one night while searching for his killer, Ayumu witnesses a girl named Haruna fending off a giant monster with her magical chainsaw. She is a Masou Shoujo, having come from the magical world. As Haruna attempts to erase his memories, she ends up erasing her own powers (and outfit) by mistake. The Megalo won't cease attacking, though, and as Haruna is quick to discover, her powers have transferred to Ayumu instead. Ayumu is now a zombie and a magical girl, and hijinks ensue.

FUNimation has licensed the series and will release it under the translated title Is This a Zombie?. Similarly, the original manga adaptation was licensed by Yen Press under that title and began publication in March 2012. Other manga adaptations, currently only available in Japan, are a 4-panel gag series and a third adaptation called Yes, I'm Your Wife.

Tropes used in Is This a Zombie? include:
Retrieved from "https://allthetropes.org/w/index.php?title=Is_This_a_Zombie%3F&oldid=1878051"
Categories:
Cookies help us deliver our services. By using our services, you agree to our use of cookies.