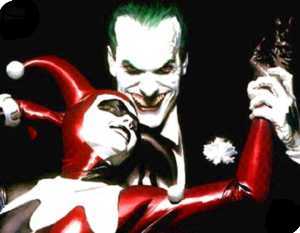 A match made in hell.

Funny thing. Villains, especially supervillains, are evil, cruel, sadistic bastards. But no matter how many puppies they kick, nuns they throw down mineshafts, or orphans they starve to death, they must have a girlfriend.

This girlfriend is almost always defined exclusively in terms of their relationship to the villain. The role she plays in the plot, however, depends a great deal on how her character is defined. She may be just as evil as he is and actually share his goals. She could be a ditz who doesn't really like evil things but just isn't bright enough to realize she's in a relationship with a very bad person.

Depending on her skill set she might actually be a valued member of the villain's criminal organization. If not, expect much grumbling from his underlings about why the boss even bothers to keep her around.

See Also: Perky Female Minion for a similar character (usually) without an explicit relationship and Unholy Matrimony for a couple that are each villains in their own right. A Lady Macbeth is generally older and goads her partner into committing evil acts. Sometimes subject to a High Heel Face Turn.

Examples of Dark Mistress include: