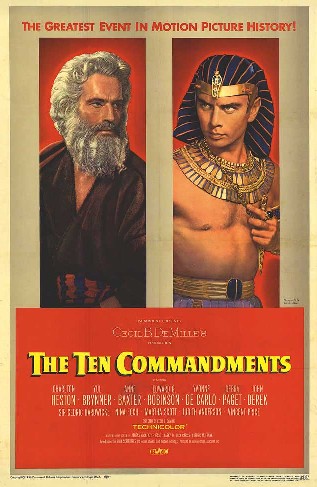 The Ten Commandments is the last of the great Cecil B. DeMille epics.

This 1956 film from Paramount tells The Bible story of Moses and the Exodus. Charlton Heston plays Moses. Yul Brynner plays Rameses. They are in a Love Triangle with Nefretiri (Anne Baxter), whom Moses might have won, had the matter of injustice to Hebrew slaves not come up. Other important characters are, naturally, Moses's brother Aaron (John Carradine); Sephora (Yvonne de Carlo), daughter of Jethro and Moses's eventual wife; Joshua (Jon Derek); and Liliah (Debra Paget), the woman Joshua loves -- who happens to be the sex slave of the overseer Dathan (Edward G. Robinson), see?

You know the basic tale -- or if you don't, you need either to see this or read the source material. Moses hears the voice of God while out in the wilderness. It ages him about forty years -- hey, the film may be long, but to keep the cast of characters constant, the time in which it takes place is compressed. Moses goes to Rameses to tell him that God wants him to let His people go, or else. "Or else" happens. Nefretiri tries to seduce Moses out of this position; it doesn't work...

The film won one Academy Award for its special effects, and was nominated for seven others, including best picture. The majestic score was written by Elmer Bernstein as his first major film project.

The dedicated and curious might want to compare this with The Prince of Egypt. The source material is the same (though this film might've been distilled through an extra novel), but the directions taken with it are very different.

There was also a Ten Commandments mini-series starring Dougray Scott which rips apart the Moses story.

Tropes used in The Ten Commandments include:
Retrieved from "https://allthetropes.org/w/index.php?title=The_Ten_Commandments&oldid=1921854"
Categories:
Cookies help us deliver our services. By using our services, you agree to our use of cookies.