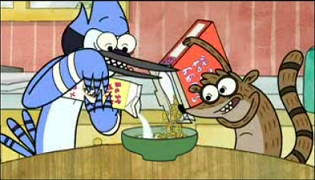 All right, so you got these two 23-year-olds who are best friends. Regular enough. They work as groundskeepers of a public city park. Pretty normal so far. They are a giant blue jay and a raccoon named Mordecai and Rigby respectively, who work for a gumball machine named Benson and live near a giant lollipop named Pops. As you can tell, Nothing Exciting Ever Happens Here. Everything is regular. Regular Show is the brainchild of J.G. Quintel, who was the creative director of The Marvelous Misadventures of Flapjack, which should explain some things.

For example, one episode has the main characters eating cereal, playing Rock-Paper-Scissors over a chair, summoning an inter-dimensional monster after getting one hundred ties in a row, and then having everything turn back to normal. And this was on Mordecai and Rigby's first day at work, no less.

Just a note, most of the main characters' designs come from J.G. Quintel's previous animated student films. Mordecai and Benson were featured in a Mushroom Samba in 2 in the AM PM and Pops as a lollipop ambassador in The Naive Man From Lolliland. They're both well worth checking out, but definitely not for kids.

In an attempt to "age up" Cartoon Network, this show aired in September of 2010 and is currently[when?] being renewed for a fourth season, which should continue through 2013. New episodes used to air on Monday nights at 8:15 (7:15 central), but as of 2012 they air at 8:00 (7:00 central) on Cartoon Network. Getting Crap Past The Radar page here. Also check out the Character Sheet here.

Tropes used in Regular Show include:
Retrieved from "https://allthetropes.org/w/index.php?title=Regular_Show&oldid=1930880"
Categories:
Cookies help us deliver our services. By using our services, you agree to our use of cookies.