Everything About Fiction You Never Wanted to Know.
(Redirected from Field Trip)
Jump to navigation Jump to search 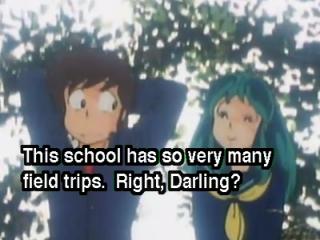 Kevin: All riiight, field trip!... Where we goin'?
Daria: The field.

Any series that takes place in a school, be it elementary, middle, high, or even kindergarten, will have at least one episode that takes place during a class trip. The destination can vary, but for day trips, it's usually educational and painfully boring (like a museum, a local historical landmark, or a cardboard box factory).

A whole episode Class Trip is a great change of scenery, and gives both an interesting place to cook up wacky hijinks and a watershed moment in romantic relationships between students. It's technically Not a Date, but it gives couples a chance to sneak off and go sightseeing by themselves. The travel itself can be a bit of an adventure, and once the class gets there, there are endless opportunities for Zany Schemes, illicit romance or mistaken assumptions that zany schemes and illicit romance are happening. It's an excellent time for a First Kiss to happen. Or for a lost Monster of the Week to attack.

Anime really likes this one: Japanese schools generally send students on at least one Class Trip per school year. Tokyo Tower is a frequent destination for day outings, but many schools annually send their graduating classes on a trip involving overnight travel.

Examples of Class Trip include: