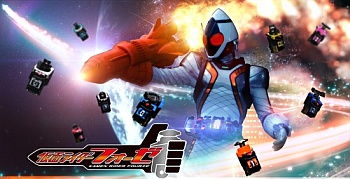 Amanogawa High School is a school that encourages every one of its students to be themselves, creating a diverse (but chaotic) student body. Arriving into this bedlam is New Transfer Student Gentaro Kisaragi, a cool guy with a Delinquent image who immediately vows to become friends with every single student in the school.

When the school is attacked by mysterious monsters named Zodiarts, Gentaro receives the Fourze Driver and Astro Switches from fellow students Kengo Utahoshi and Yuki Jojima. Using their power, he transforms into Kamen Rider Fourze to protect the students of Amanogawa High. Fourze can equip up to four Astro Switches at once, using them to equip attachments onto his arms and legs that boost his combat potential.

The plot's main driving element is Gentaro's goal in making friends with everyone in the school, even the Zodiarts Switchers. As such, many of the characters learn important life lessons from Gentaro as he tries not only to fight monsters, but also to befriend them and save them from themselves. The Zodiarts themselves show parallels to the darker sides of humanity and with each one that appears, it becomes harder and harder to free them.

Tropes used in Kamen Rider Fourze include:
Retrieved from "https://allthetropes.org/w/index.php?title=Kamen_Rider_Fourze&oldid=1730473"
Categories:
Cookies help us deliver our services. By using our services, you agree to our use of cookies.