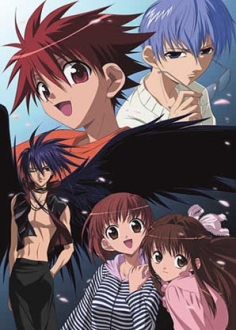 Daisuke Niwa was just your average middle schooler pining away after his unrequited love. Well, average except for the odd training his mother put him through, planting traps for him when he returned from school to test his agility and problem solving. But that all changed on his 14th birthday, when, after being rejected by his crush Risa, he suddenly transformed -- appearing much older, and his hair color changing to purple. His mother happily informs him that this is normal -- for hundreds of years, every generation of males in his family undergoes a transformation into the "legendary phantom thief, Dark" when they experience the feeling of love, thanks to a unique "genetic condition". Until the girl he loves returns his feelings wholeheartedly, Daisuke must transform into Dark and steal cursed pieces of art to cleanse them.

To Daisuke, it seems like the end of the world--he has to avoid getting overly excited when he sees his crush so he won't turn into Dark, and Dark himself just happens to have a Handsome Lech personality and happily hits on ANY female that crosses his path. Then Risa Harada, his crush, announces that her ideal man is just like Dark--which means he has to compete with himself for her affection! To complicate matters even more, Daisuke's mysterious classmate Satoshi Hiwatari starts to suspect Daisuke's secret identity--and just happens to be the commander of the police working on the Dark case.

An Anime and Manga series that seems determined to prove to you that your own teenage years weren't nearly as bad, D.N.Angel would probably never be called a masterpiece of its mediums, but it's still an entertaining romp through Shojo tropes. Sometimes called a "magical boy" series, it generally has a lighthearted, Romantic Comedy/Fantasy feel, although occasionally there's hints of darker mysteries and backstories lurking in the shadows.

The manga was started late in 1997 by Yukiru Sugisaki, and went on for 11 volumes before being put on a two-year long hiatus. Sugisaki wrote new chapters for the series again in 2008 to the delight of fans, particularly since the stopping point was a cliffhanger. Then, after a one year hiatus, Sugisaki picked up the series again for the January 2010 issue of Asuka. As of Stage 4 Volume 14, Part 1 of the manga has ended and it appears that Sugisaki is once again going on hiatus to do a 6 month serialization of a new series titled "School Girls Pin-Up". Hopes are that it will once again resume after these 6 months, as the ending to Part 1 was quite the cliffhanger. Most of the manga has been brought over by Tokyopop, though nothing yet has been announced about bringing over the already released Volume 14 and the recently announced Volume 15. The anime aired in Japan in 2003, and was released in the US by ADV Films. The anime and manga differ on some details, particularly which Harada twin Dark happens to have a thing for in the beginning. The anime also ended with a Gecko Ending (although with the way Sugisaki has been going on and off hiatus with the series for a while now, it seems like the anime ending might be the only resolution available).

If you're a fan of fantasy shojo (or Bishounen!), both are worth a look--if only to spot the many tropes the series makes use of.

Tropes used in D.N.Angel include:
Retrieved from "https://allthetropes.org/w/index.php?title=D.N.Angel&oldid=1729151"
Categories:
Cookies help us deliver our services. By using our services, you agree to our use of cookies.