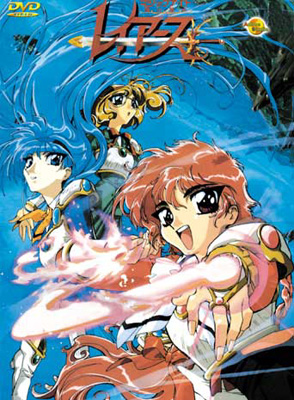 This Shojo series is one of the most popular creations of the creative collective known as CLAMP, blending Magical Girl, Humongous Mecha and High Fantasy into a unique and entertaining mix.

Schoolgirls Shidou Hikaru, Ryuuzaki Umi and Hououji Fuu are visiting Tokyo Tower with their respective middle-school classes when a mysterious force addresses them as "Magic Knights", begs for their help, and then transports them to another world. The three fourteen-year-olds find themselves in the magical world of Cephiro, brought there by a wizard named Clef. Cephiro, he explains, is held stable and safe by the constant attention of the Pillar, a princess named Emeraude. But Emeraude is now the prisoner of her former high priest, Zagato, and monsters have begun to overrun the countryside. Clef informs them that they are the Magic Knights of prophecy, who will save Cephiro from its impending doom. He gives them mystic armor and magical powers to use in their quest. But before he can explain how to use them, agents of Zagato appear on the scene, and the girls are dispatched on their mission with only the faintest idea of what they have to do.

In the course of their adventures, the three girls must discover their magical gifts and hone them while fighting their way across the countryside through hordes of monsters. They encounter Presea, the Master Smith, who sends them on a quest to find the materials for their magic weapons. And they learn that to accomplish the prophecy they embody, they must find and awaken the great Mashin, the elemental god-creatures who sleep and waken only to protect Cephiro. In the process the girls, initially strangers, must learn about each other, and how to trust and depend on their teammates; they soon become fast friends. Dodging, defeating and even subverting the deadly agents of Zagato, they finally come to the point of fulfilling the ancient prophecy -- only to discover that what they must do is nothing at all like what they expected.

Magic Knight Rayearth, despite its deceptively simple "schoolgirls on a quest" appearance, is a surprisingly complex story, with layers of motivation and backstory behind the events of Cephiro's crisis. What seems at first to be a simple, straight-line adventure/quest plot turns out to be darker and far more complex, and the final revelation of the prophecy's true meaning forces Hikaru, Umi and Fuu to make mature, grown-up choices that belie the earlier impression of "fairytale fun".

One of the story's greatest strengths is characterization. The girls are unique and clearly drawn -- Genki Girl Hikaru, snobby Rich Bitch Umi and the bookish, excessively-polite Fuu (who addresses every creature they kill as "monster-san") are about as disparate a trio as can be found; how they work through their differences and forge a determined and skilled team of fighters is one of the show's triumphs of character development. But even the villains are surprisingly complex and even sympathetic on some levels.

Although ultimately a drama, Magic Knight Rayearth leavens its serious storylines with occasional mild doses of slapstick and Super-Deformed action. Much like the gravedigger scene in Hamlet, this comedy doesn't detract from the story but instead throws its more serious aspect into sharper relief. Although supposedly targeted at young teen girls, it is easily watchable by adults of all ages.

There's also an OVA, which changes around the plot to be set in the real world, and the manga has a sequel. The second season of the anime was adapted from the manga sequel, which primarily dealt with the aftermath of the Magic Knights' actions in the first season.

There is also a video game adaption of it for a couple systems in Japan, with the Sega Saturn version released in the United States by Working Designs. This version is noteworthy not so much for the actual game, but for the Development Hell that it went through - it was delayed for so long that it ended up as the final title ever released for the Saturn in the U.S.

Tropes used in Magic Knight Rayearth include:
The Rayearth OVA provides examples of:
Retrieved from "https://allthetropes.org/w/index.php?title=Magic_Knight_Rayearth&oldid=1831147"
Categories:
Cookies help us deliver our services. By using our services, you agree to our use of cookies.