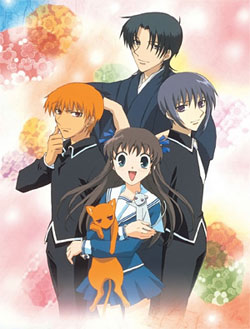 After the death of her mother, young Tohru Honda has been secretly living on her own in a tent. Her life changes forever when she stumbles upon the secret of the Sohma family, whose land she has been living on. They are afflicted by a Hereditary Curse that changes some members of the family into animals of the Eastern Zodiac when they are hugged by someone of the opposite sex that is not also a Zodiac member.

Now living with three of the Sohma family, every day is an adventure for sweet Tohru, as she gets to know all of the very different family members better, in both common and bizarre situations. But, the Sohma family curse is certainly no laughing matter; it also holds horrible cruelty and heartbreak. Despite this, the members of the Sohma family find a new peace thanks to the presence of Tohru.

Also see the series' Characters page for tropes that can be applied directly to the characters.

Watch it on Hulu here.

Tropes used in Fruits Basket include:
Retrieved from "https://allthetropes.org/w/index.php?title=Fruits_Basket&oldid=1964252"
Categories:
Cookies help us deliver our services. By using our services, you agree to our use of cookies.