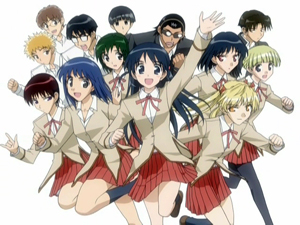 High school romance comedy. Idiot delinquent (Harima) has a secret, obsessive crush on an even more clueless classmate (Tenma), who is in love with a complete oddball (Karasuma), who is in love with food (curry). Tenma's quiet, gentle sister Yakumo, her Ojou friend Eri, and the hot school nurse may or may not have feelings for Harima, depending on the rumors you believe and the time of day. Also, both Tenma and Harima's cousin Itoko think Harima is in a relationship with Yakumo. Class rep Hanai is loudly in love with Yakumo (thus seeing Harima as his rival), while two or three girls may or may not have feelings for him. Also, there is Ichijo, who likes Imadori, who likes Mikoto, who likes one of her ex-senpais, who got a girlfriend since the last time she saw him. And so forth. Failed confessions, confessions to the wrong people, and relationship misunderstandings abound.

You will rarely take any of this seriously.

School Rumble consists of two 26-episode seasons, each covering a term of the school year, as well as two 2-episode OVAs: the first centered on the first term, and the second centered on the very end of their high school life. The second season ends with the characters planning the class trip that forms the first major arc of the third term. The second OVA ends with the characters having a class reunion some time after they have all graduated high school , but occurring presumably not beyond their first year of college .

Based on a manga written by Jin Kobayashi which ended on chapter 283 (if it can really be called an ending), followed by a brief sequel manga, "School Rumble Z", which wrapped things up slightly more.

Tropes used in School Rumble include:
Retrieved from "https://allthetropes.org/w/index.php?title=School_Rumble&oldid=1962777"
Categories:
Cookies help us deliver our services. By using our services, you agree to our use of cookies.