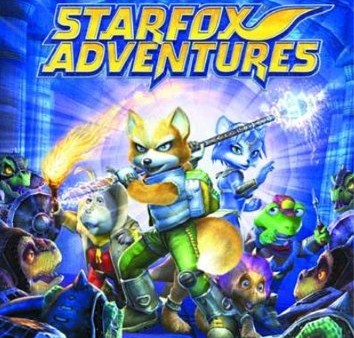 Star Fox Adventures is a Video Game produced by Rare for the Nintendo GameCube, and the oddball in the Star FOX series. Originally an unrelated Nintendo 64 title called Dinosaur Planet, the game contains very little of the shooting and spaceship-piloting that the series was known for, relegating these aspects to mini-games between large chunks of action-filled adventuring gameplay.

The Star Fox crew (this time consisting of Fox McCloud, Peppy Hare, Slippy Toad, and R.O.B. the Robot Buddy) intercepts a distress call from the mysterious planet Sauria and set out to investigate. There, they discover a world inhabited by sentient dinosaurs and other strange creatures, and learn that the planet is suffering under the tyrannical rule of the villainous General Scales. Under the prospect of a hefty pay needed for the maintenance of their ship (the effects of which are seen in StarFoxAssault with the newer, sleek designs) offered by General Pepper, Fox accepts the mission to explore the planet and save it from destruction. This is the game that introduced Krystal to the series.

For those who are curious about the game's original incarnation as Dinosaur Planet, a text file has been ripped from the game and can be found here, and contains a decent amount of original content before becoming Star Fox Adventures. Be warned as it contains spoilers both major and minor for the game.

Tropes used in Star Fox Adventures include:
Retrieved from "https://allthetropes.org/w/index.php?title=Star_Fox_Adventures&oldid=1881827"
Categories:
Cookies help us deliver our services. By using our services, you agree to our use of cookies.