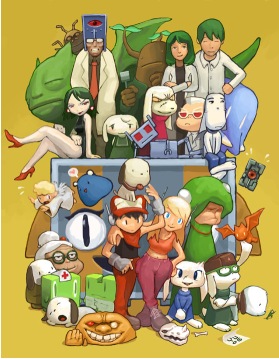 You wake up in a cave. You shoot your way out of the cave, so you can get to a village in another cave. Then you have to go to a different cave, followed by...

Cave Story is a freeware Metroidvania game by Daisuke Amaya a.k.a. Studio Pixel. The game thrusts you into the action with no explanations, forcing you to figure out the plot by yourself as you go. There are robot soldiers, bunny people called Mimigas, and a Mad Scientist with a magic helmet and a Morally-Ambiguous Doctorate trying to Take Over the World.

This game was created entirely by one man in his spare time. Daisuke Amaya wrote the scenario, drew the artwork and scenery, animated the sprites, designed all of the levels, composed all of the music, and programmed the entire game engine, all by himself over the course of five years.

Its breeding ground on the English-speaking Internet is here. There have been many ports. There's a Mac OS X port available here, and a Linux port available here. A port to the original Xbox also exists, as well as a PSP port, here (requires custom firmware). There has also been ports to several other obscure systems and platforms, among them Haiku OS, AROS, AmigaOS 4, Sega Genesis, GP2X, GP2X Wiz, and the TI graphing calculator.

Also, it was released on the Wii, DSiWare, the Apple Mac Store and, as of November 22, 2011, on Steam as a commercial version with extra features. It's also available for the 3DS as a remake with complete 3D, new content, and more! Another port was released for the 3DS eShop, which features the Cave Story+ Steam extras but not the 3D sprites. A port for Nintendo Switch of the 3DS version was released in 2017.

Daisuke has confirmed that a sequel is very, very likely.[context?]

Tropes used in Cave Story include:
Retrieved from "https://allthetropes.org/w/index.php?title=Cave_Story&oldid=1964108"
Categories:
Cookies help us deliver our services. By using our services, you agree to our use of cookies.