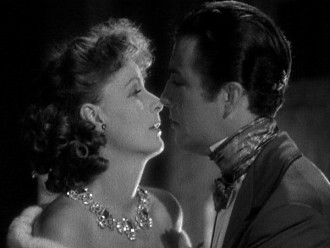 Bob and Alice have been spending a lot of time together, causing people to comment on their relationship but so far nothing has resulted from it. Often though, they will find themselves gazing deeply into each other's eyes, one indication of their UST. This can often precede an Almost Kiss, as this is usually what is happening before that. If this is an extremely intense gaze into the other's eyes, this might be an indication that a Big Damn Kiss is on the horizon. It can also be a platonic look between two friends.

There are three versions of this held gaze, depending on the atmosphere of the story. If it is a romance, this will appear at least once, accompanied by some passion on one (or both) of the partners in the gaze, hence it fits into the passionate look variant of the trope. If the atmosphere is more laidback and with a focus on males instead, this trope will (usually) be platonic, and the two men will hold each other's gaze meaningfully to either encourage the other or to just let them know that they are there for them, like the platonic examples below. And, the third version of this trope is a supernatural one - a shared gaze where souls gaze into the other person's soul, all at once having a more deeper experience than the other two versions mentioned above can have.

A Sister Trope of Almost Kiss, as this commonly happens before the kiss, and sometimes it precedes a Big Damn Kiss, and it is also a subtrope of Longing Look, but different in that it is two people holding each other's gazes. It naturally tends to happen when the two lovers Literally Fall In Love. Compare Staring Contest.

Examples of Held Gaze include:

"For me, meeting someone's eyes is always risky. Every human being knows what I'm talking about. Try it. Walk up to someone, without speaking and look them in the eyes. There's a a certain amount of leeway for second, or two, or three. And then there's a distinct sensation of contact, of intimacy. That's when regular folks cough and look away. Wizards, though, get the full ride of a soulgaze." Harry Dresden, White Night.

Lupin's eyes were fixed on Sirius.

"Personally.", said Lupin quietly, looking away from Sirius at last.

Liz: You know, some people actually craft stories, and when the story doesn't have an ending you don't just create one out of thin air by playing music or having people give each other meaningful looks. [music swells] Sure, that might manipulate an audience into THINKING they're feeling something, but it sucks.
Jack:[gives Lemon meaningful stare, their eyes lock}
Liz:[spins and locks eyes with Jack]

"What are you looking at?"