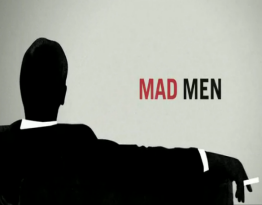 Mad Men was an American period drama involving an advertising firm on Madison Avenue, New York City, during the 1960s. The show explored the changing American landscape through the eyes of the Sterling-Cooper Ad Agency and the world of advertising at the dawn of the decade that would change America forever.

The series, while an ensemble, focused mainly on Don Draper (Jon Hamm), a charming rogue of an ad executive with major personal problems: mainly the fact that he can't keep his dick in his pants, as well as his Dark and Troubled Past.

As the show progressed through the 1960s, many seasons are tied to milestone events: Season one culminated in the 1960 election of John F. Kennedy, season two took place during 1962 and ended with the Cuban Missile Crisis, and season three ran through 1963 and featured the JFK assassination in its penultimate episode. Season four (1964-65) broke this pattern, though much of it centered around the Vietnam War.

The series was originally pitched to HBO, which turned it down. It ended up on AMC, which has run with the ball as far as Mad Men being to AMC as The Shield is to FX Network. The series has received much critical acclaim and positive press, even though most critics tend to downplay the show's Deconstruction of the entire idea of the innocent, ideal "good old days" of America's past (and up-play Christina Hendricks' considerable advertising assets...)

A character sheet is currently under construction, show it some love.

Tropes used in Mad Men include: