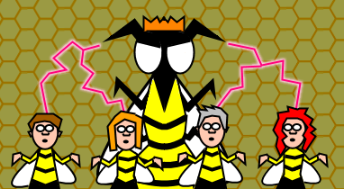 Properly speaking, a Hive Mind is a mind arising from the interaction of many individuals. There is no single individual in control of the Hive Mind, any more than there is a single neuron in control of your brain. This makes the Hive Mind a fearsome enemy, both militarily and psychologically because there's no command-and-control point that you can hit to knock it out, they feel no fear, will willingly sacrifice individuals for "the greater good", and are as impersonally destructive as a tidal wave...

...only, that's inconvenient when it comes time for the Big Damn Heroes to save the day. Inevitably, it transpires that there is in fact someone or something in control of the Hive Mind. This individual is usually—but not always—referred to as the queen. Presumably this is by analogy with real-world ants and bees, even though real ant and bee queens exercise no control over their colonies—their sole job is to pop out eggs.

Their methods of control can be anything from "pheromones", to Mind Control, to Cybernetics, but always exercises iron-clad control over drones... usually. Sometimes, but not always, her powers coincide with (or as) The Virus and she can expand her hive to normal people.

Sometimes the Hive Mind is designed with a Hive Queen from the start. At other times, the "control element" gets retconned into the story so that the Hive Mind can be beaten. Indeed, development of a Hive Queen may be the most common form of Villain Decay that threatens Hive Minds. It should be noted that not all hive queens are evil or expansionistic... some are perfectly Reasonable Authority Figure if protective of their "children", it just transpires that since insects—hive minded ones especially—are seen as gross and commie Hive Queens are too.

If the Hive Queen is pregnant with eggs/mooks, she will almost invariably be depicted as bloated and overweight.

Also see God Save Us From the Queen, Monster Progenitor, Vampire Monarch, and Monster Lord. Frequently wants to help individuals lose The Evils of Free Will.

Examples of Hive Queen include:

Retrieved from "https://allthetropes.org/w/index.php?title=Hive_Queen&oldid=1967015"
Categories:
Cookies help us deliver our services. By using our services, you agree to our use of cookies.