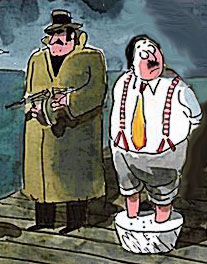 When gangsters are punishing someone for crossing them, they are often shown having the victim tied up to a chair with his feet in a barrel, into which is poured quick-drying concrete. Once the concrete is dry, the victim is then dropped into a body of water, simultaneously killing the target and disposing of the body in a supposedly untraceable manner.

Alternately, the victim is left tied up at the bottom of a construction site while the basement is being poured.

Depending on the exact methods used, overlap with some form of Death Trap can occur.

This is largely a Discredited Trope, as few, if any, gangland murders are actually performed in this manner. Most are simple bullet-to-the-head affairs that generally lack the drama that fiction demands. It may be related, however, to a similar method of execution supposedly once used by the Freemasons against oath-breakers.

Examples of Cement Shoes include:

Retrieved from "https://allthetropes.org/w/index.php?title=Cement_Shoes&oldid=1942078"
Categories:
Cookies help us deliver our services. By using our services, you agree to our use of cookies.