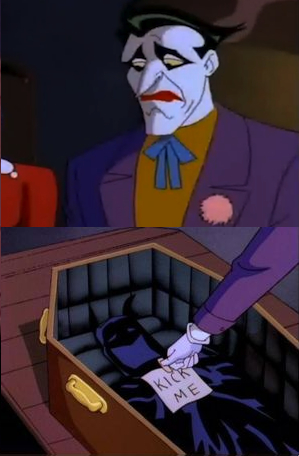 An antagonist discovers the hero they've opposed for quite a while has apparently met their end, death or otherwise. After all these years, they're gone. It's too good to be true.

Cue a rather bizarre sense of a loss. This may just be the result of the loss of the thing that was a driving motivation in the first place, but occasionally the villain might even seem to genuinely miss him. Luckily, the hero may well turn up alive somewhere else, and the mourning will quickly be dismissed as things return to status quo. Also a common cause/symptom of Foe Yay.

Contrast And There Was Much Rejoicing. Sister trope of Victory Is Boring. When the fandom does this to a hated character's death, it's Alas, Poor Scrappy.

Examples of Antagonist in Mourning include:

Retrieved from "https://allthetropes.org/w/index.php?title=Antagonist_in_Mourning&oldid=1748239"
Categories:
Cookies help us deliver our services. By using our services, you agree to our use of cookies.