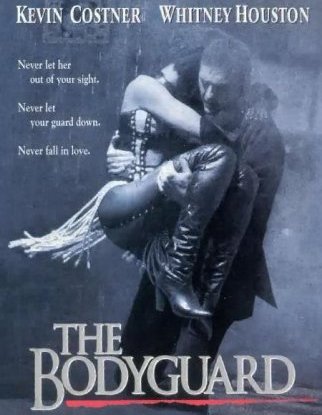 AND IIIIIII WILL ALWAYS LOVE YOUUUUUUUUUU

Modern beliefs in equal gender rights make the good old Rescue Romance trope somewhat difficult to play straight. However, there's a question in the air... what if "that male" is either hired or honor-bound to protect "that female"? That wouldn't be chauvinist at all - not only is the guy getting rewarded or paid (whether in money, benefits, rank raises, etc.) by his bosses or upperclassmen for taking care of the girl's safety, with his reputation as a whole depends heavily on how well he guards and shields her, but it fulfills residual Knight in Shining Armor imagery without causing eyebrow raising among the fandom.

If said bodyguard is a female who takes care of a male, she can keep her romantic feelings for her ward and get to show off her Action Girl skills constantly, which greatly decreases the chances of her being a victim of Chickification. Finally, this provides a good way to get a Chaste or Celibate Hero, who normally wouldn't be interested in the opposite (or the same) sex into a position where their romantic feelings can be more easily played upon.

Sweet deal... or is it? Because this often conflicts with the protector's sense of professionalism, especially if they're a Battle Butler or a Ninja Maid. And let's not even talk of what happens if bodyguard and the liege's relationship goes bad, if the conflicts get the protector distracted, or if plans and orders coming from the bosses change...

A Bodyguard Crush is extremely common in Lady and Knight dynamics.

Variants include the protected having his/her crush for the bodyguard first, and the bodyguard being picked for the job because one of them has a crush.

Examples of Bodyguard Crush include:

Retrieved from "https://allthetropes.org/w/index.php?title=Bodyguard_Crush&oldid=1918535"
Categories:
Cookies help us deliver our services. By using our services, you agree to our use of cookies.