Everything About Fiction You Never Wanted to Know.
Jump to navigation Jump to search
/wiki/Linkin Parkcreator 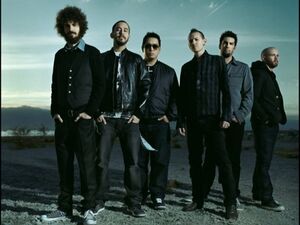 Linkin Park is a rock band from Agoura Hills, California. Since their formation in 1996, the band has sold more than fifty million albums and won two Grammy Awards. They achieved mainstream success in 2000 with their debut album Hybrid Theory, and continued it with the remix album Reanimation, the follow-up Meteora, and their mashup collaboration with rapper Jay-Z, Collision Course.

To some, they are known for blending the sounds of nu metal, rap, and rock together in an appealing fashion. To others, however, they are remembered for excessive screaming and lyrics that suggest the emotional range and maturity of any average 13 year old. As such, they have been the butt of many jokes on forums and are often criticized for introducing "emo" elements into the mainstream.

The band eventually realized this and changed their sound with their third studio album, Minutes to Midnight. Upon release, flame wars were ignited in every faction of their fandom, splitting their fanbase permanently. Years after the fact, mentioning "New Sound vs. Old Sound" still produces a large backlash. The next time the band stepped into the studio, they made an effort to insulate themselves from public opinion, only intensifying the discord when they released that album, A Thousand Suns, which was an even more radical departure.

The band was in hiatus from July 2017 (when their lead singer Chester Bennington committed suicide) to August 2020.

Their song lyrics have inspired the trope name for The Walls Are Closing In.

Discography:
Linkin Park provides examples of the following tropes:
Retrieved from "https://allthetropes.org/w/index.php?title=Linkin_Park&oldid=1843014"
Categories:
Cookies help us deliver our services. By using our services, you agree to our use of cookies.