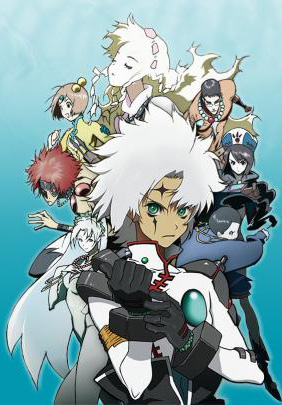 The seventh title in Namco Bandai's Tales (series), released in August 2005 in Japan and February 2006 in North America.

Tales Of Legendia is split into two halves: the first is the Main Quest, a typical Save the World story. The second half of the game is comprised of the Character Quests, a series of loosely-connected side stories focusing on the backstories and development of the supporting cast.

The Main Quest begins with a young Alliance Marine called Senel Coolidge drifting on an endless ocean with his adopted sister Shirley. With their food and water supplies exhausted, they are on the verge of death when a massive island bursts out of the mist with frightening speed and sweeps their boat up in its wake. When they awaken on its shores, Senel and Shirley discover that the "island" is actually the Legacy, a massive ship created by a long-lost civilisation and now colonised by humanity.

Their new life aboard the Legacy is soon thrown into chaos when several opposing factions aboard the ship begin to suspect that Shirley is the legendary "Merines", a being able to control the Legacy and its ancient technologies at will.

The Character Quest section focuses on an evil force that has begun to corrupt the monsters and people of the Legacy, forcing each party member to confront their own dark side.

Tropes used in Tales of Legendia include:
Retrieved from "https://allthetropes.org/w/index.php?title=Tales_of_Legendia&oldid=1776487"
Categories: