The Walls Are Closing In 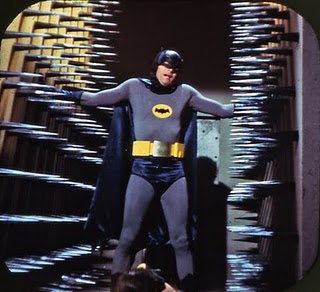 You mean you don't have a Bat-Wall Brace in that Utility Belt!?

The Hero has infiltrated the Supervillain Lair, but he's been discovered and his position is compromised.

On the run from the Big Bad's Mooks, our hero makes a hasty retreat from the danger only to either wind up at a dead end or fall through a Fake Platform or Trap Door. Now finding himself in an empty room, all available exits (if any) immediately seal shut, and our hero is left all alone.

And then the walls start closing in, threatening to squash our hero from the sides.

Like its Sister Trope, Descending Ceiling, The Walls Are Closing In shares many of the same functions and tends to show up in the same situations. This Death Trap can be decorated with Spikes of Doom to look even more menacing, and it can be used hand-in-hand with Descending Ceiling on a Conveyor Belt O' Doom (usually with one coming right after the other in sequence). It may also be subject to a type of a Magic Countdown; no matter how much time the heroes take, the walls are juuust far enough for them to escape, even moving back between shots.

Common ways for heroes to escape this vicious trap is to find a means to brace the moving walls, wait for their Sidekick to find a way inside and get them out Just in Time before the walls (or spiked walls) would have surely crushed them, or a combination of the two.

This was commonly used as a stock Cliff Hanger in Film Serials of the 1940s, and has appeared frequently in such works. If this occurs in a Video Game, it may be an Escape Sequence.

Compare Advancing Wall of Doom, when the hero has to outrun a single moving wall; and there may exist some overlap between the two tropes if the Death Trap is only one moving wall.

See Also Smashing Hallway Traps of Doom where a character has to run a gauntlet of smashing objects without getting hit by any.

Not to be confused with Deadly Walls.

The trope name was inspired by the pre-chorus lyrics from the Linkin Park song "Crawling."

Examples of The Walls Are Closing In include:

Retrieved from "https://allthetropes.org/w/index.php?title=The_Walls_Are_Closing_In&oldid=1584563"
Categories:
Cookies help us deliver our services. By using our services, you agree to our use of cookies.