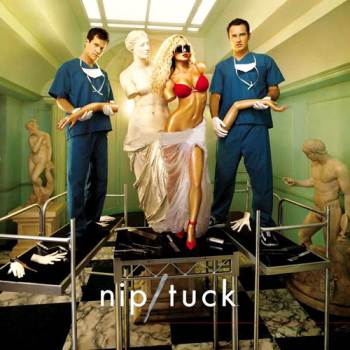 It has the distinction of being one of the most controversial shows on basic cable. Beauty and the disturbing implications of it are explored along with the drama in their lives in cases that are often Ripped from the Headlines. The show goes out of its way to alternate between showing everything that's ugly about human life and everything that's hot about sex, and all of the characters seem more than happy to perpetuate that dynamic.

The series focuses upon the relationship between Sean and Christian, friends since college and partners in a successful plastic surgery medical practice. Sadly, their lives are far from happy: Sean's marriage to Julia, who dropped out of medical school after becoming pregnant (with Christian's child, due to a one-night stand) is strained at best. Their "oldest" son Matt (an 18-year-old played by an actor in his late twenties) is a complete screw-up of epic proportions. Matt's crazy "antics" include trying to cut off his penis's foreskin by himself, seducing his girlfriend's lesbian lover, running over a young girl and disfiguring her as a result, sleeping with a 30+ year old woman who turns out to be transsexual, beating up another transsexual (who later has her friends beat Matt up and piss on him afterwords), doing crystal meth and becoming a Scientologist while being married to his real dad Christian's ex-fiancée, porn star Kimber Henry, and fathering a daughter with her, almost starring in gay porn because he can't afford baby food, burning himself while "cooking up" drugs, dating a horribly disfigured woman and then cruelly dumping her when she won't marry him, and becoming an armed robber while dressed like a mime.

On the other end of the show, there is Christian Troy, the self-absorbed serial womanizer with a tragic past (his father raped his mother, who gave him up for adoption, where he was sexually abused by his foster father). Christian has multiple relationships over the course of the series, most notably being his relationship with ex-actress/porn star Kimber, who Christian once literally traded to a rival plastic surgeon for his car.

Rounding out the cast is Liz Cruz, the lesbian anesthesiologist who is the sarcastic foil to Christian and generally the voice of reason within the show.

Basically, every one of the core characters, and most of the supporting ones, are people you want to reach through the screen and slap at least once per episode.

Not to be confused with Nip and Tuck.

Tropes used in Nip Tuck include:
Retrieved from "https://allthetropes.org/w/index.php?title=Nip_Tuck&oldid=1485438"
Categories: