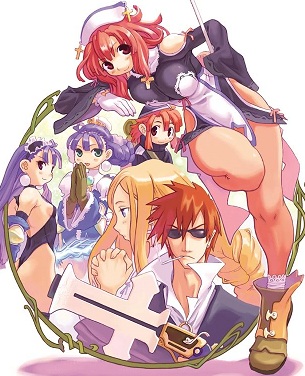 La Pucelle (a.k.a. La Pucelle: Tactics) is a Turn-Based Strategy game released on the PlayStation 2 by Nippon Ichi. In Japan, it came out a year before Disgaea: Hour of Darkness, but was released several months after that game in other countries. It is set in the same world as the Marl Kingdom series, and one of the characters is the grandson of the main character of the first Marl Kingdom game ( a.k.a. Rhapsody: A Musical Adventure).

It takes place in the kingdom of Paprica, and tells the tale of a battle between the Maiden of Light and the Dark Prince, favored servant of the Fallen Angel Calamity. The Church of the Holy Maiden servants of the Light has employed a group of demon hunters known as "La Pucelle" to help keep the city of Pot au Feu safe from monsters.

The story focuses on three particular members of La Pucelle: the short-tempered and built-like-a-brick-house (and just as subtle) Prier, her younger brother Culotte and the even-handed and wise Alouette. Prier and Culotte have just graduated to full members of La Pucelle, and Prier has big plans to be the next Maiden of Light.

An Updated Rerelease has been released for the PSP entitled "La Pucelle: Ragnarok". It has some Disgaea cameos (shocking), multiple new endings, and yes, an additional scenario in four acts about Demon Overlord Prier. NISA has officially announced that they will not be localizing it.

In addition to many of the tropes mentioned in the Nippon Ichi article, this game provides examples of:

The Updated Rerelease contains the following

Retrieved from "https://allthetropes.org/w/index.php?title=La_Pucelle&oldid=1857602"
Categories:
Cookies help us deliver our services. By using our services, you agree to our use of cookies.