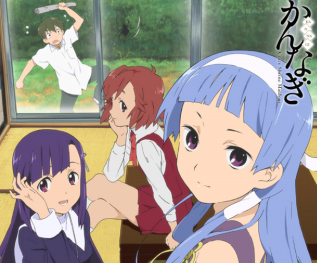 Jin Mikuriya, Ordinary High School Student, has just finished carving a statue out of a sacred tree that was recently chopped down. To his surprise his statue comes to life with the guardian spirit that once inhabited the tree -- and she looks like a teenage girl. This girl, Nagi, sets off to purify the town of the impurities that are starting to spread since the tree has been cleared.

Jin's childhood friend Tsugumi also finds herself getting involved in the events, along with the members of Jin's art club at school. A major source of conflict comes from Nagi's sister Zange, a goddess born from the other, still-standing, sacred tree.

Kannagi: Crazy Shrine Maidens or Kannagi for short, is an ongoing (currently on hiatus, due to the author's health) manga by Eri Takenashi that began in 2005. There is also a series of light novels that began in 2008 written by Tōka Takei and an anime series/OVA that was made in 2008.

Tropes used in Kannagi include:
Retrieved from "https://allthetropes.org/w/index.php?title=Kannagi&oldid=1899252"
Categories:
Cookies help us deliver our services. By using our services, you agree to our use of cookies.