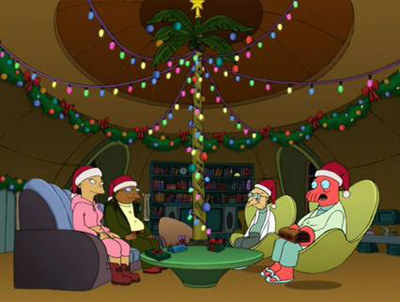 Xmas on the Planet Express

Even if the Christmas Special is widely used, a few writers catch on that some stories take place in a setting where certain holidays and celebrations shouldn't exist in the original sense. So the characters celebrate a holiday that's (hopefully) just coincidentally similar enough to have the audience roll their eyes.

Despite the eye-rolling, this can be a Justified Trope if the world of the story has solstices and equinoxes like our own, which would be logical times of the year to have a celebration.

Naturally, these episodes are aired around the holiday they're really trying to depict, and sometimes may receive a name change in order to comment on them without raising the ire of Media Watchdogs.

Occasionally, they use a real holiday that would make sense in the world of the series but isn't commonly celebrated among most of the target audience. For instance, the second-season Xena: Warrior Princess episode "A Solstice Carol."

Note that this trope only covers the use (or abuse) of Christmas or 'Christmas-ish' holidays in fictional, fantastical, or historical settings where the celebration as we know it would not exist; random other terms used for the holidays in modern settings should not be listed here.

This trope is named after the Christmas Special of Futurama, in which Santa Claus is actually an evil robot that kills everyone because he judges everything as naughty (except Zoidberg). The letter X (coming from the Greek letter χ, "chi") has been used as an abbreviation for "Christ" (Χριστός) for centuries. In modern times, however, the spelling "Xmas" is sometimes misconstrued as part of the supposed "War on Christmas" to secularize the holiday, literally "taking the 'Christ' out of 'Christmas'" by people on both sides of the argument. Also there are some people who come up with folk etymologies for the X such as that it means 'Criss (cross) mas' (as in the onomatopaeic description of drawing an X) and are genuinely surprised to learn about the Greek letter.

Examples of You Mean "Xmas" include:

Retrieved from "https://allthetropes.org/w/index.php?title=You_Mean_%22Xmas%22&oldid=1887953"
Categories:
Cookies help us deliver our services. By using our services, you agree to our use of cookies.