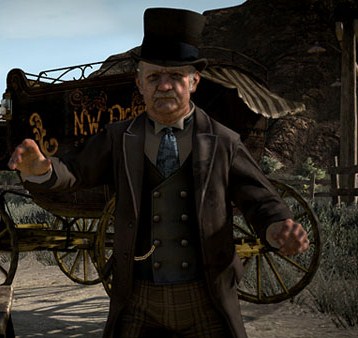 I know a cure for all ailments, Mr. Marston!

A specific type of itinerant Con Man, somewhat similar to the Hustler in being both less financially stable and having a poorer group of victims as well, and also has some overlap with the Honest John as being a purveyor of shoddy goods, not always phony medicine.

The character is often played as a Loveable Rogue type, frequently being extremely attractive to local women, having "seen the world" (or at least is good at pretending to have done so). Somewhat inexplicably sympathetic, given the obvious result of a sick person being given medicine which doesn't actually work.

Definitely Truth in Television, hearkening back to the late-19th/early-20th century, when there were no standards for practicing medicine or selling goods and "caveat emptor" was the rule. The rise of "alternative medicine" and other forms of All-Natural Snake Oil provides lots of modern examples as well. Snake Oil Salesmen are also known as "quacks," though the term "quack" also covers fraudulent doctors who are nowhere near as skilled as they claim to be, such as the worst Back Alley Doctors.

In an interesting subversion, actual snake oil contains plenty of Omega-3, so it can be beneficial to the health. However, in a Double Subversion, the actual benefits of Omega-3 are so mysterious-to-laymen-but-vaguely-positive that the modern version of this could be the Fish Oil or Omega-3 Salesman. Also, oil from the Chinese Water Snake has been used for a very long time in Chinese medicine, though not as the extreme panacea advertised by this sort of character (indeed, this connotation is largely unknown in China). Rather, it's merely used as an ordinary anti-inflammatory agent.

Expect to find actual Snake Oil Salesmen at the local Medicine Show. The Beat Bag is his hat.

Examples of Snake Oil Salesman include:

Retrieved from "https://allthetropes.org/w/index.php?title=Snake_Oil_Salesman&oldid=1807243"
Categories:
Cookies help us deliver our services. By using our services, you agree to our use of cookies.