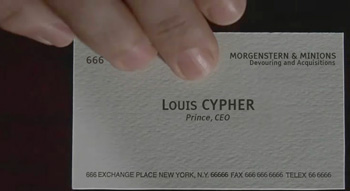 Well, who would have guessed.

This is the flip side of finding out you've got a god (or God) hanging around incognito. This is when you find out that that slightly strange fellow who's been loitering nearby is... the other one.

Maybe the literal Devil has taken a personal interest, or maybe it's just a high-level demon or an Agent of General Badness, whatever the local badness happens to be called. In any case, it's powerful, it's bad, and it's been standing right there next to you all this time. Yikes!

Be very wary of guys named "Lou", "Luke", "Lukas", or "Lucius" particularly if their last name is Siffer or Cypher or something like that. Keep an ear open for Milton (author of Paradise Lost) and Morgenstern (German for "morning star"). Also take a careful look at the ones named "Nick", "Scratch", "Deuce", "Thorn" or some variant thereon. In certain cases, don't trust women named "Lucy" or "Georgia." Apparently the Devil's not very good at choosing aliases, despite having a huge variety to pick from. Or maybe it just shows his opinion of the hero's intelligence level. Or, it could just be ego.

Common in Deal with the Devil stories. See also Sdrawkcab Name. Related to Most Definitely Not a Villain. If God Is Evil, Louis Cypher may be a Steven Ulysses Perhero. Sub-Trope of Devil in Disguise.

If this character isn't at least implied to be the Devil himself, but just has a demonic sounding name to emphasize their general evilness, the example should go on this page.

For those who don't understand the title: Lucifer

This is a reveal trope, so, spoilers ahoy!

Examples of Louis Cypher include:

Retrieved from "https://allthetropes.org/w/index.php?title=Louis_Cypher&oldid=1825764"
Categories:
Cookies help us deliver our services. By using our services, you agree to our use of cookies.