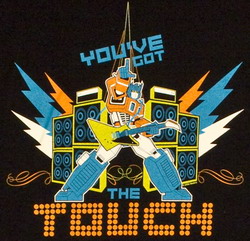 This is it. Whether it be a culmination of a dozen hours of gameplay, or the first two acts of the film, or a season's worth of hour-long episodes, after all this time and effort, it's time for the Final Battle.

For some reason, nothing says "Let's kick some ass!" quite like A Little Something We Call "Rock and Roll" (except maybe Ominous Latin Chanting, or both). Maybe it's the heavy bass, or the wailing guitar, or the pounding drums, but rock music just seems to get the blood pumping, so it's typically used to underscore the big action scenes.

This trope applies to rock of any kind being played when the heroes do their thing. Sometimes it's a Theme Music Power-Up. May overlap with The Power of Rock, where rocking out is the heroes doing their thing. Occasionally accompanied by Ominous Latin Chanting, which means someone's really about to get wrecked. For even more epicness, add some Orchestral Bombing. Has every reason to be Crowning Music of Awesome, so it had better be up to it. Compare Big Damn Heroes.

The trope title is a pun based on the Transformers Catch Phrase, "Autobots, (transform and) roll out!"

Examples of Autobots Rock Out include:

Retrieved from "https://allthetropes.org/w/index.php?title=Autobots_Rock_Out&oldid=1932080"
Categories:
Cookies help us deliver our services. By using our services, you agree to our use of cookies.