Everything About Fiction You Never Wanted to Know.
(Redirected from Sonic the Hedgehog The Movie)
Jump to navigation Jump to search 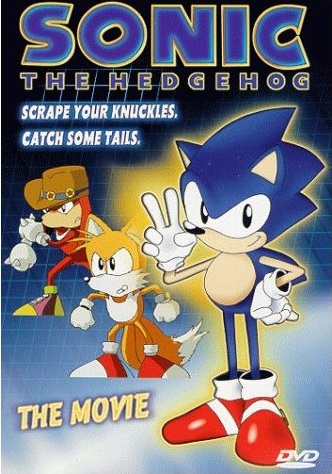 Ow! The Tagline! It BUUURNS!

An hour-long anime OVA starring everybody's favorite blue hedgehog. It was originally released in Japan in 1996 (initially as the two half-hour VHS tapes Journey to Eggmanland and Sonic vs. Metal Sonic); the English dub by ADV was released in 1999, the day before Sonic Adventure hit the shelves.

Sonic and Tails are enjoying a relaxing day on the beach when they're visited by Old Man Hoot, who's carrying a message from the President of South Island — a message so urgent that Hoot doesn't notice his aircraft is on fire. After rescuing Hoot, Sonic and Tails fly off to speak with the President, only to find that he and his Catgirl daughter Sera are being held hostage (for a given value of "hostage") by Dr. Robotnik.

Oddly enough, what Robotnik wants is Sonic's help — he's been forced out of his base in Robotropolis by the evil(er) Metal Robotnik. And now, Metal Robotnik has overloaded the power generator of Robotropolis — in less than a day, the generator will explode and cause the end of Planet Freedom as we know it. Sonic distrusts the story, but he's persuaded to help out anyway.

Sonic and Tails fly off to Robotropolis, breeze through the hazards in their way, and fight through Metal Robotnik himself. Along the way, they're joined by the free-roaming treasure-hunter Knuckles, who just happens to be in the area.

However, when the trio finally reach the generator, they find that Sonic was right to distrust Robotnik. The story was a ruse to enable the completion of Hyper Metal Sonic — a robotic dopplegänger who not only has Sonic's speed, but Sonic's knowledge as well. A dopplegänger hell-bent on destroying the world for Dr. Robotnik...

Sonic The Hedgehog is widely regarded as that rarest of rarities — a good videogame movie, though the voice acting in the English dub is debatable. It only has a superficial resemblance to the events of the video games yet the plot, art, and characterization still do an excellent job of capturing the spirit of the classic games. In any case when it was made the Sonic canon had far less development to clash with. Certainly it's surprisingly well-received among the fanbase, despite having no links to anything else. It currently holds a 68% "Fresh" rating on Rotten Tomatoes via the RT community (no official critic reviews, however).

ANOTHER NOTE: This film is not to be confused with the anime series or three western animation shows also based on the Sonic character.

Tropes used in Sonic the Hedgehog (OVA) include:
Retrieved from "https://allthetropes.org/w/index.php?title=Sonic_the_Hedgehog_(OVA)&oldid=1614553"
Categories:
Cookies help us deliver our services. By using our services, you agree to our use of cookies.