Stripped to the Bone 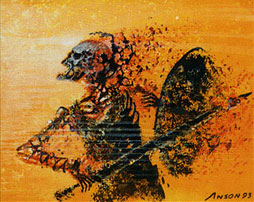 "I feel so alone, gonna end up a big ole pile of them bones."
—Alice in Chains, "Them Bones"

The human skeleton is pretty tough. If you drink a lot of milk and get plenty of sunshine, your bones can grow to be stronger than concrete; shattering a bone requires a really, really strong hit, as in "crashing your car at 60 km/h"-strong. Did you know that crematoria actually grind bones because otherwise the fragments could be too big to fit in the urns?

But a lot of science fiction writers seem to think that the skeleton is absolutely impervious to any weapon. Hit 'em with Energy Weapons (especially Disintegrator Rays), fry 'em with electricity, dunk 'em in acid, all that will be left is a skeleton. If it's technology that does it, the resulting skeleton is usually bleach white like a medical grade demonstration. If magic, the resulting skeleton is normally old and dusty. The skeleton will also typically still be joined together perfectly, even if all the sinews and tissues that hold it together have been destroyed. Almost like it's some kind of prop or something.

Arguably, of course, the bones are the hardest and densest structures in the human body (the jaw and teeth especially) so it would make sense that the skeleton would be the last body part to be destroyed. Of course, when whatever substance that has disintegrated the rest of the body has also been known to destroy much tougher substances, it goes from being understandable to an expected Sci Fi trope.

The purpose of this trope, of course, is shock-effect rather than realism: i.e. to visibly communicate the fact that the person is really dead, since their simply disappearing wouldn't have nearly the same impact as seeing them instantly turned into The Grim Reaper's twin brother. Meanwhile, at the same time it's "cleaner" and less gruesome to show a person turned into a Halloween-type skeleton than the blood-and-gore of nastier deaths, while likewise being more devastating since it would obviously take more of an impact to strip someone to the bones than simply gouge the flesh. A variant of this trope is to have a person be reduced to a skeleton, let them stay like that for a few seconds, and then have the skeleton disintegrate or collapse.

This might be part of why people are Made of Iron. Also, compare Made of Plasticine; here, everything but the skeleton appears to be. See also Robotic Reveal.

Examples of Stripped to the Bone include: