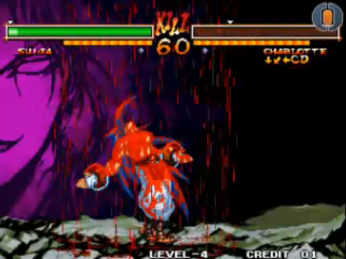 Darn! I forgot my umbrella today!

"Raining blood,
From a lacerated sky,
Bleeding its horror,
Creating my structure,
Now I shall reign in blood!"

A version of a Gory Discretion Shot, because the body itself is usually not seen. Usually takes one of three forms:

The first is when a character (very likely a Badass) knocks someone into the air and tears them apart while they're up there using a sword, gun, psychic attack, etc. Often accompanied by maniacal laughter or some wry comment when carried out by the Anti-Hero or Noble Demon—extra points if they seem totally unfazed by what they've just done.

The second involves an unknowing character finding a drop of "water" on themselves or the floor, and upon looking up see a body in a high place dripping down on them. Sometimes takes the form of blood seeping through the ceiling, often onto a character's face or into their eye. Cue Girly-scream.

A third form is when it's actually is raining blood. Cue the arrival of the religious horror or Eldritch Abomination.

Examples of Rain of Blood include:

The raindrops turn into droplets of blood and travel down my cheeks...

Highlord Darion Mograine: Soldiers of the Scourge, death knights of Acherus, minions of the darkness: hear the call of the Highlord! RISE! The skies turn red with the blood of the fallen! The Lich King watches over us, minions! Leave only ashes and misery in your destructive wake!

One benefit of traveling with Transylvitians was sleeping in the field without getting bitten by mosquitoes. One drawback was that it occasionally rained something that wasn't weather.[1]