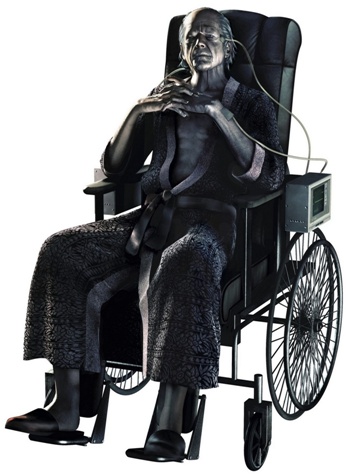 They see me rollin'/They hatin'

Going hand-in-hand with Genius Cripple (though not all Genius Cripples are Evil Cripples and vice-versa), an Evil Cripple is a villain or generally morally perturbed character who also suffers a debilitating physical condition, often taking the form of paralysis that causes him or her use a wheelchair.

There are a variety of reasons this trope exists. In some stories, especially those featuring superheroes, the contrast between a hero with super strength and a villain who is physically handicapped and instead relies on his brainpower plays on the archetype of brain vs. brawn. These stories also tend to feature a Freudian Excuse in the background of the villain that is often based around his disability and is the cause of his hatred for the world. This has Unfortunate Implications, obviously.

A popular image in the Evil Cripple Humiliation Conga or Break the Haughty situation is for such a character to be knocked out of his wheelchair and have to crawl around on the ground helplessly. This, along with the tendency for the disability to be implied to be the fault of the character or some sort of karmic punishment, can fall into Unfortunate Implications and Acceptable Hard Luck Targets. This is a profoundly negative portrayal of handicapped people that has recently begun to be examined in the field of Disability Studies.

A common subversion of this trope is when the character is revealed to not actually be crippled, but was exploiting that image to maintain a cover or give the illusion of helplessness. Given that, some of these examples contain spoilers.

Examples of Evil Cripple include:

"His mother did not call him Lungri [the Lame One] for nothing," said Mother Wolf quietly. "He has been lame in one foot from his birth. That is why he has only killed cattle. Now the villagers of the Waingunga are angry with him, and he has come here to make our villagers angry. They will scour the jungle for him when he is far away, and we and our children must run when the grass is set alight. Indeed, we are very grateful to Shere Khan!"