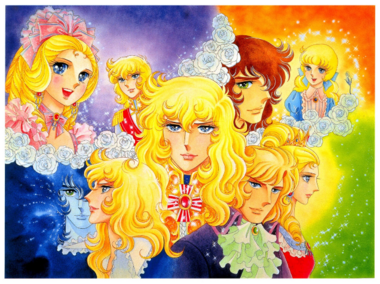 Berusaiyu no Bara [1] or The Rose of Versailles is a historical fantasy of the pre-French Revolution period. Its central character is Oscar François de Jarjayes, a Parisian noblewoman who has been raised as a boy to provide her father with a "son" and heir. Oscar is made head of the Royal Guards of Versailles, and her first assignment is to protect and chaperon the new Crown Princess Marie Antoinette.

If you were wondering about the scope of anime, this series places the bar well above your initial guess. Incorporating many French historical figures and the very real political nuances of the period, this series can be read either as a political (leftist and/or rightist) screed or as a heart-rending love story. Either way, it is more than worth your time.

A Takarazuka adaptation of this work is one of the most popular. There's also "Lady Oscar", an obscure Live Action Adaptation by French director Jacques Demy generally considered to be So Okay It's Average.

The manga is notable for being highly influential for the Shoujo category. Elements of it can be seen in shows like Revolutionary Girl Utena and Le Chevalier d'Eon. In 2009 a live action series called Haken no Oscar aired in Japan, which constantly references Rose of Versailles.

Not to be confused with the Japanese Power Metal band Versailles.

Tropes used in Rose of Versailles include:
Retrieved from "https://allthetropes.org/w/index.php?title=Rose_of_Versailles&oldid=1922510"
Categories:
Cookies help us deliver our services. By using our services, you agree to our use of cookies.