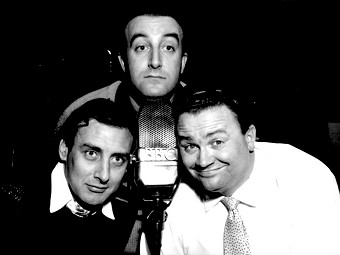 The Goon Show was a BBC Radio comedy show starring Peter Sellers, Spike Milligan (who was also the main writer), and Harry Secombe, which ran from 1951 to 1960. The first series was titled Crazy People - with Radio's Own Crazy Gang: The Goons. Michael Bentine is credited with being a co-inventor of the concept and in fact was a full Goon for the first two series, but left after artistic and personal differences with Milligan.

Beginning as a sketch comedy series, the show accumulated a cast of recurring characters and evolved into a surreal, continuity-free sitcom, with each episode dropping the characters into a different place, time, and situation, and leaving them to react to it in their characteristic fashion.

Wallace Greenslade acted as the announcer (Andrew Timothy in the earlier series), while Ray Ellington (jazz singer) and Max Geldray (harmonica) provided musical interludes. They also were called on occasionally to play small parts - often parts for which their voices were highly inappropriate.

The scripts were mostly written by Spike Milligan, with various persons helping him. A few episodes were written by these helpers while Milligan was unavailable. Considerable ad-libbing occurred, much ad-libbing was carefully scripted, and lampshades were regularly hung.

The show had several guests over the years, most often Valentine Dyall "the Man in Black" who played various similar but distinct roles.

The Goon Show's style of humour was an influence on many later British comedians, notably Monty Python and The Goodies, and even The Beatles' humorous side has roots in this show. (John Lennon specifically credited the Goons as an influence.) It's fair to say that if you like any subsequent British comedy at all, somewhere along the line you have The Goon Show to thank. The Firesign Theater was also deeply influenced by the Goons.

Not to be confused with The Goon, a noir/horror/comedic parody comic series about a muscle-bound mob enforcer who fights demons, monsters, and a rival gang led by a necromancer and composed of zombies; nor should it be confused with any shows that happen to be made by goons.

Tropes used in The Goon Show include:
Retrieved from "https://allthetropes.org/w/index.php?title=The_Goon_Show&oldid=1779052"
Categories: