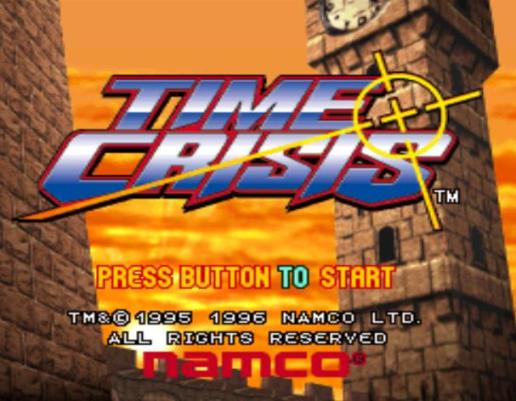 Admit it: whenever you play those Light Gun Games, the absurd amount of enemies that constantly chip away your health/life makes you believe The Computer Is a Cheating Bastard. How are you ever suppose to stop this onslaught? Enter Time Crisis by Namco Bandai, a series of Light Gun Games for the arcades, now in its fourth iteration. Its main distinguishing feature is its use of a foot pedal: the player holds the pedal down to attack; when the pedal is released, the player hides behind a nearby wall/tree/bench/other object and is safe from attack, but can't retaliate. This means that unlike most light gun games, any attack can be dodged without harm even once it's been launched, although the reaction time you have can be punishingly low.

Each game follows a different set of characters as they gun their way through unrelated international crises. The only two constants are the VSSE (Vital Situation Swift Execution), a Heroes-R-Us organization the heroes belong to, and "Wild Dog", a freelance mercenary who serves as each villain's Dragon, despite blowing himself up in increasingly impressive pyrotechnics each time.

As one might expect, time is an important part of the series. A timer is constantly running down to zero, being replenished each time you clear a "room" of enemies. In the first game, the timer was the main challenge: it had strict limits, and you lost all your lives if time ran out. Later games toned it down considerably: you only lose one life, and the limits are much easier to deal with. In fact, they mostly just prevent excessive turtling and make sure the player eventually dies even if they never press the pedal.

Starting with Time Crisis 2, the game is set up as two cabinets hooked together for two-player co-operative play. Both players will go through the levels at slightly different vantage points on the action and sections with more pronounced differences (one player on the ground, the another on a railing above). As an added bonus, a red reticule used by a Mook is visualized as a direct hit to the player, thus allowing them to know exactly when they should let go of the pedal to dodge (which wasn't present in the first, another reason why the original was so strict). Time Crisis 3 grants players extra weapons, in the form of a machine gun, shotgun and grenade launcher, which were more powerful but had limited ammunition. To refill them, players had to shoot a specific yellow Mook. The latest Time Crisis 4 forces players to take part in "Multi-Screen Scenarios", where near endless Mooks come and attack from different directions (until the timer reaches zero, and provided that the player survives).

Also worth mentioning here is Time Crisis: Project Titan, a Gaiden Game/semi-sequel that follows the protagonist in the first, which actually showcases the "Multi-Screen Scenario" before 4, and Crisis Zone, basically Time Crisis with a machine gun. It's sometimes considered part of the same series or at least a spinoff, thanks to the loose connections between the main games, although neither the VSSE nor Wild Dog appear. Another similar game, Razing Storm, is a combination of 3 and Crisis Zone with Playstation3 hardware, featuring two members of a hi-tech special forces unit. Like Zone, the players have a machine gun as their standard weapon, but will switch to special weapons like rocket launchers and sniper rifles as the situation warrants, such as sniping rooftop sentries to give a squadmate time to call down a Kill Sat strike or when a Humongous Mecha crashes the party.

The games have been ported to all three generations of Playstations; the original and Project Titan for PlayStation, 2 and 3 and Crisis Zone for PlayStation 2, and 4 and Razing Storm for Play Station 3 (though 4 was done twice over: once as its own game with a rather awkward light gun, and again as an additional title to Razing Storm, alongside DeadStorm Pirates. All three games utilize the Move). Additionally, the original, 3, 4 (the first release), Crisis Zone and Razing Storm have exclusive scenarios not found in the arcades that expands more of the story, usually from another character's perspective. There's been several ports to the iPad as well.

Tropes used in Time Crisis include:

(Tropes specifically for Razing Storm should head there.)

Retrieved from "https://allthetropes.org/w/index.php?title=Time_Crisis&oldid=1611154"
Categories:
Cookies help us deliver our services. By using our services, you agree to our use of cookies.