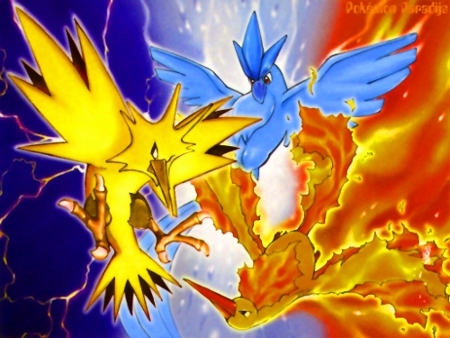 Fire, Ice, and Lightning—the definitive trio of Elemental Attacks, used in nigh-all videogames that were inspired by the original Dungeons & Dragons and quite a large number that aren't. If you have attack spells, Magitek, psychokinetic abilities, or even Mons, there will be one each of fire, ice, and lightning, all of which are otherwise equal in power or usefulness.

It's not hard to see why these three are so popular. Fire is fire, ice is fire's opposite due to being shinier and more crystalline than water or earth, and lightning is louder, glowier, and comes from the sky. Furthermore, if you conceive of ice as just "coldness", all three are forms of Pure Energy (or pure lack-of-energy,) and thus can be shaped into Energy Weapons or launched as Glowy Beams of Doom.

They're usually Color Coded for Your Convenience. Fire is always red, ice is always somewhere between white and bright blue, and lightning is always yellow. As a result, these powers are the all-time number-one origin of Palette Swap Underground Monkeys.

One can justify their unlikely pairing by imagining a common origin in basic particle physics—supposedly, fire (or heat) comes from speeding up atoms, ice (or cold) comes from slowing down atoms, and lightning comes from rubbing atoms together (or pulling them apart to reveal matter with a net charge). Sort of. Or by considering their elemental natures: Fire is life, Cold is death, and Lightning is the motion from one state to another. Or, you could remember the Rule of Cool. Your choice. It may also be simply that these three are easier to weaponize than other combinations.

Despite being a trio, they do not usually form a complete Rock-Paper-Scissors triangle; in the usual cases, fire and ice beat each other, and are neutral towards lightning. But in rare cases, lightning beats ice (it's just water) and is beaten by fire because heat increases resistance to electricity (at least in metals; in air, heat decreases resistance, so fire will make lightning stronger...?).

Sometimes the trio is expanded with a fourth member, Earth, to form a quartet similar to the classical Elemental Powers (with ice = water and lightning = air).

Examples of Fire, Ice, Lightning include:

Retrieved from "https://allthetropes.org/w/index.php?title=Fire,_Ice,_Lightning&oldid=1836155"
Categories:
Cookies help us deliver our services. By using our services, you agree to our use of cookies.