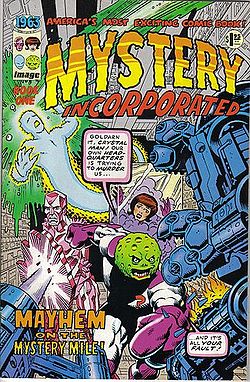 1963 is a six-issue miniseries written by Alan Moore and published in 1993. Stylistically, it invokes The Silver Age of Comic Books (particularly, that of the early Marvel Comics), complete with spoof advertisements in the style of the day. This last item was repeated with a period-appropriate twist by Moore's later project with Kevin O'Neill, The League of Extraordinary Gentlemen.

The series has never been finished as initially intended. It was meant to be followed by an 80-page annual, in which the 1963 characters are catapulted forward 30 years to meet with the Dark Age characters of 1993.

Everything's so harsh and vivid!