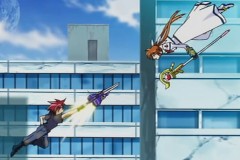 A form of Awesome but Impractical combat, Air Jousting involves two combatants flying at each other at high speed and smashing together, much like Medieval knights on horses and may be applied to characters riding flying mounts, such as dragons . If the combatants have weapons that resemble actual lances it seems even more like jousting. If both are covered with a Sphere of Power then they'll bounce off each other like very destructive glowing ping-pong balls.

This is very common in Shonen series, and is a logical application of Flying Brick powers, and likely to overlap with Beam Spam and Beam-O-War. Very often ends with a Single-Stroke Battle. If combined with Gun Fu it's likely an especially bizarre example of Short-Range Long-Range Weapon.

Somewhat Truth in Television, as this is what WWI era dogfights basically boiled down to, since fighter aircraft can ONLY fly straight forward, and changing direction requires wide, slow turns at high speeds. However, this behavior makes much less sense for characters with magical flying powers that allow them to turn completely around, flying backwards or sideways (even briefly) while maintaining their current direction and velocity.

Examples of Air Jousting include:

Retrieved from "https://allthetropes.org/w/index.php?title=Air_Jousting&oldid=1893725"
Categories:
Cookies help us deliver our services. By using our services, you agree to our use of cookies.