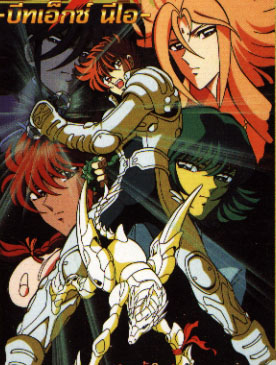 Written by Masami Kurumada after he finished Saint Seiya prematurely due to the insistence of his publishers four years ago,[when?] B't X has a similar premise but with a different setting and execution. Some people consider it Saint Seiya WITH SCIENCE!!!

The story begins with Teppei Takamiya, as he travels to China after years of living quietly in the fictional Kamui Island. He attempts to reunite with his brother Kotaro, who left Germany five years ago to study robotics at a university. Unfortunately, no sooner than his brother begins an exhibition about an advanced form of machine, he's kidnapped by a Humongous Mecha in the shape of a wasp and a servant of the Machine Empire. Teppei starts a chase, using a gauntlet known as the "Messiah Fist" to hold onto the wasp as it travels to a secretive base in the Gobi Desert which serves as the Empire's headquarters.

Getting thrown into a garbage heap and facing a cyborg he somehow is familiar with, Teppei's blood awakens a relic from the past; a kirin-type B't known only as "X" which, five years ago, was considered the most powerful B't in existence. Both are equally stubborn, although quite different in many ways, and after a few initial squabbles, X resolves to help Teppei in his quest to save his brother.

Along the way, we find out quite a bit about Teppei's past, the reasons Kotaro was kidnapped, and the Machine Empire's plans involving a home-grown Cosmic Horror of Devil Gundam proportions.

Both the manga and the anime have been licensed in America.

Tropes used in B't X include: