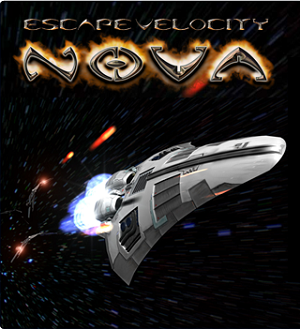 A series of three open-ended sci-fi shareware computer games from 1996 to 2002, published by Ambrosia Software for the Macintosh (though the last is also available for Windows). Looks like Asteroids, plays like Elite.

Though being part of the same series, the games are not connected by any sort of overarching plot, very much like Final Fantasy. In each, you start with nothing more than a simple shuttle craft and are free to more or less do what you want. While the first game required the player to pick one side or the other in the ongoing galactic conflict, later games introduced more complex politics. Since the third game is the only one still updated, the publisher has released free Total Conversion plug-ins containing the scenarios from the first two games.

EV Nova has its own wiki here.

Tropes used in Escape Velocity include:
Retrieved from "https://allthetropes.org/w/index.php?title=Escape_Velocity&oldid=1735077"
Categories: