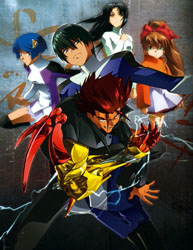 Essentially, the Japanese take on X-Men. With Digimon thrown in.

A massive disaster hits Japan, separating a section of Tokyo into a new island, known as the "Lost Ground". The disaster also causes 1% of the babies born there to develop superpowers. These powers come in the form of causing matter to vanish (be it areas of landscape, vehicles, watermelons or dead bodies) and using the mass to summon separate, machine-like beings, known as Alters, which personify a superpower of some sort. (One subset of Alter Users are "alloy-types", whose Alters form part of themselves, and one or two display the ability to affect other's Alters without summoning one themselves, but mostly the Alters are used like Mons). The nature of the superpowers varies from typical Stock Super Powers to really weird ideas: "Turn anything into water", "Turn any car into a pink Mach 5", "Summon an enormous gun" or even "Do anything, as long as it involves watermelons".

One organization (HOLY) strives to control the super-powered population while rebuilding civilization on the island, while rebels and thugs attempts to resist them, and small communities live independently of the government in the wilder lands.

The manga makes a number of changes from the anime. The anime uses subtle characterization and two mutually-antagonistic Anti-Hero leads (the Knight Templar and the Idiot Hero) without overly favoring one or the other. The manga is more prone to Card Carrying Villains and gives a different explanation as to the Meta Origin of the Alters (Evolutionary Levels). Actually, the ending of the manga is very much like a later work we tropers love but with more gore, nudity, and profanity.

Tropes used in S-CRY-ed include:

Retrieved from "https://allthetropes.org/w/index.php?title=S-CRY-ed&oldid=1555981"
Categories:
Cookies help us deliver our services. By using our services, you agree to our use of cookies.