Punched Across the Room 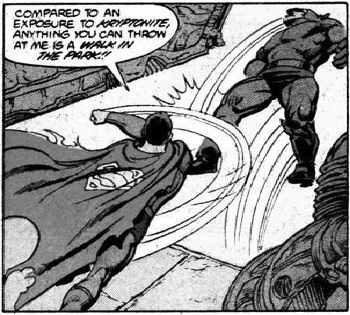 Hand-to-hand variations of Blown Across the Room. In movies and videogames, punches and kicks send you flying, usually in the direction of something breakable. Never results in anything worse than Blood From the Mouth.

This might be because you're Made of Iron, and thus punches that are known to pierce cement or steel can't harm you, or it might simply be that martial arts activate the Rule of Cool.

Nearly every example involves superhuman, or above average strength. So, it's usually excusable.

Sometimes, the Monster of the Week is too busy throwing the hero around to Just Hit Him. May lead into a Meteor Move. When played for humor, often results in The Pratfall.

Examples of Punched Across the Room include:

Retrieved from "https://allthetropes.org/w/index.php?title=Punched_Across_the_Room&oldid=1745800"
Categories:
Cookies help us deliver our services. By using our services, you agree to our use of cookies.