As Told by Ginger 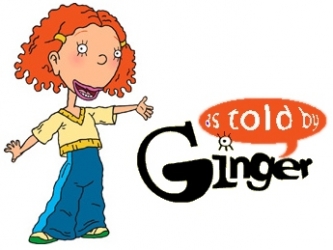 As Told by Ginger is a cartoon that focuses mainly on the life of junior-high-school student Ginger Foutley. She, along with her friends Darren Patterson, Dodie Bishop and Macie Lightfoot, all try to rise from the position of school geeks as they solve many conflicts that come their way. Luckily for Ginger, the most popular girl in school, Courtney Gripling, has taken a liking to her and often includes her in her social plans. She is intrigued by her (what Courtney calls them) 'gingerisms'. However, Miranda Killgallen, Courtney's right hand woman, makes sure that she is not bumped down from her position thanks to Ginger. At home, Ginger records her lively adventures in her diary. Her little brother Carl, is often scheming with Hoodsey Bishop in his own side plots; and her mother, Lois, is always there for advice, which Ginger is always open to listen to. The series takes place in the fictional town of Sheltered Shrubs, located in Connecticut. It ran for about 3 years from late 1999 to 2003.

It was among the few animated series in Nickelodeon that was ahead of its time, featuring (relatively) realistic situations and teenage issues which soon set a mark for the future titles to come in the Teen Nick time slot. The most notable among the show pointed out that it didn't follow the Limited Wardrobe trope compared to the other Nick titles. It is also one of the only shows, not just on Nickelodeon, but perhaps in all of children's entertainment, to portray interracial romance in a serious (and positive) light.

Tropes used in As Told by Ginger include:

Ms. Zorski: What you did to that Remedial Math class, that was wrong, Carl.