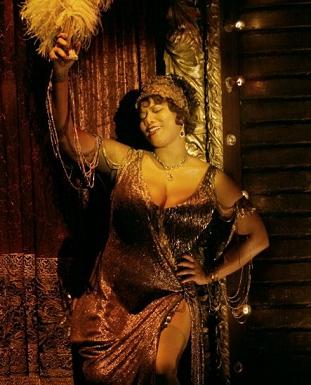 When you're good to Mama...

The Big Beautiful Woman, or BBW for short, is a subversion of Hollywood's usual standards of size and beauty. She isn't sexy despite her full figure, she's sexy because of it. She's comfortable with the fact that her weight is part of her just like her hair color. Any angst or insecurity over her body was resolved long ago (or over the course of the story, if this trope is the end result), and she's a confident woman who has a healthy dating life and knows how to find outfits that look fantastic on her. In an earlier time, she'd be called Rubenesque. Sloppier works might give her the same feel as a Pet Homosexual: a raunchy best friend who's always talking about sex but is never seen having it. Writers can avoid this by making her part of the Beta Couple or (believe it or not) making her the main heroine as an everywoman.

There's plenty of overlap with Sassy Black Woman (she'll at least have the attitude if not the skin tone) and Fag Hag. Also a source of Fetish Fuel. When adding examples, avoid ladies who are Hollywood Pudgy. She must be visibly heavy-set for the trope to be in effect. May be part of the Tiny Guy, Huge Girl Pairing. Sometimes paired with Of Corsets Sexy, as some but not all full-figured women esteem corsets highly as a way to produce a perfect hourglass figure. Contrast with Brawn Hilda and Amazonian Beauty.

For authors who would like to use this trope, but prefer not to keep the change, a Temporary Bulk Change episode can be used to show off Fetish Fuel.

See also Big Beautiful Man (the Spear Counterpart) and Chubby Chaser (who may admire either of the above, if not both).

No real life examples, please; some women and girls in real life have body image issues, and would not take being listed here as a compliment. There's no reason to trigger their anxieties.

Examples of Big Beautiful Woman include:

Retrieved from "https://allthetropes.org/w/index.php?title=Big_Beautiful_Woman&oldid=1931533"
Categories:
Cookies help us deliver our services. By using our services, you agree to our use of cookies.