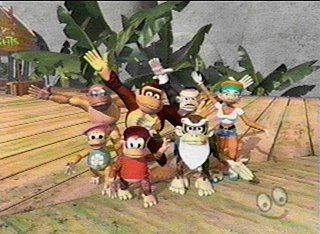 On the island of Kongo Bongo, The Hero of the series, Donkey Kong, is the island's future ruler, as selected by a magical orb called the Crystal Coconut, which has the ability to grant wishes. But the Coconut is a prize coveted by the show's villain, King K. Rool, who aims to steal it and take over the island himself. Thus, DK has to always stand guard over it, which isn't an easy task since he's frequently taking time off to do activities such as eating his Trademark Favorite Food, bananas. Sometimes, another threat appears in the form of a group of Pirates led by Kaptain Skurvy, who believes the Coconut belongs to him. And did I mention there's a lot of singing? It happens at least Once an Episode.

While the series takes place in an Alternate Continuity from that of the games, a few elements of the show would find their way into the games, particularly in Donkey Kong 64, where Crystal Coconuts are an item (but not a MacGuffin like here), and Cranky Kong works as a potion-mixing Mad Scientist.

Justified, however as Skurvy is a Kannon (a Klump in pirate clothes) and Green Kroc is just a Mook

Retrieved from "https://allthetropes.org/w/index.php?title=Donkey_Kong_Country_(animation)&oldid=1431030"
Categories:
Cookies help us deliver our services. By using our services, you agree to our use of cookies.