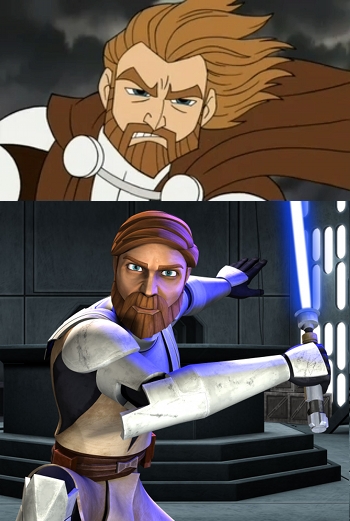 The Force, or extra strength hair spray? You decide.

In old or low-budget CGI, the characters will never wear loose garments, have long hair or include anything that might flow or rustle in wind or when moving. This was the case because early CGI software and hardware limitations made anything other than clunky, Uncanny Valley inspiring graphics impossible. These technical limits and costs are slowly being pushed back, but it's still hard and costly to simulate.

To circumvent these limitations, authors and graphic artists got creative and made a few concessions and stylistic choices. Here's a small list:

Averting this trope is something of a Holy Grail for CGI animators, which can lead to being averted too hard. A lot of instances of flowing hair or gowns end up flowing too much, taking attention from anything else in the scene, like Dr. Ross' hair in Final Fantasy the Spirits Within, or Nariko's in Heavenly Sword. When flowing is done right, it either is unambiguously the centerpiece of the scene, or doesn't call attention to itself but rather reinforces a viewer's immersion. This trope is why A Space Marine Is You is still so extremely prevalent: It's easier to model and animate a bald guy (or better yet, always helmeted) wearing an armored spacesuit than it is trying to create an Elegant Gothic Lolita from Harajuku. Just imagine the processing power required to handle the delicate and intricate clothes that flow in a Dramatic Wind... or when running and fighting.

Although to be fair, in real life a lot of people's hair barely moves. In CGI, a "good" movie has the characters medium-length hair moving as if it's submersed in water. In real life, it would barely move at all, even long hair comes nowhere near close to it, becoming a case of Reality Is Unrealistic. For an approach to averting this trope, see Jiggle Physics.

Examples of No Flow in CGI include:

Retrieved from "https://allthetropes.org/w/index.php?title=No_Flow_in_CGI&oldid=1639772"
Categories:
Cookies help us deliver our services. By using our services, you agree to our use of cookies.