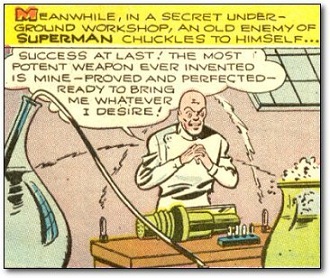 The Doomsday Device is the modus operandi of any self-respecting Omnicidal Maniac and Mad Scientist. Usually completing one to hold the world hostage is his reason for living.

Obviously, to build something this high on the Sliding Scale of Villain Threat, he needs a ton of Unobtainium or cosmic keystones to make it work, which the villain will have to steal in a string of smaller crimes that will draw the hero's attention to him long before it is complete.

You may notice that in story terms, a Doomsday Device is one big MacGuffin powered by several smaller MacGuffins. Having one in a story is essentially giving a villain a "Collect The Plot Coupon" quest and having the hero stop them.

The nature of the Doomsday Device does not matter unless it is actually activated. It rarely is, outside of deconstructions or backstories of ruined worlds. It can essentially do anything, as long as the end result is global or near-global destruction. An Earthshattering Kaboom, an army of Nanomachines, a Zombie Apocalypse, Weather Control, Frickin' Laser Beams, or a particularly large Horde of Alien Locusts. It's the scale that makes it a Doomsday Device. Typically, a villain will construct one that best reflects his personality.

Also keep in mind, that the entire point of a Doomsday Device is lost... if you keep it a secret, nein?

Compare with Lost Superweapon and Artifact of Doom. See also Pointless Doomsday Device. The method of many Apocalypse How and Apocalypse Wow events.

Examples of Doomsday Device include:

Retrieved from "https://allthetropes.org/w/index.php?title=Doomsday_Device&oldid=1879700"
Categories:
Cookies help us deliver our services. By using our services, you agree to our use of cookies.